There are many reasons why the typical hierarchy structure drastically hinges the speed in which growth and change occurs.

And perhaps one of the most frustrating and common reasons is due to company “roadblocks,” such as over-complicated or redundant processes and obligatory (and sometimes unnecessary) meetings.

It’s no wonder leaders struggle to innovate when they’re running from meeting to meeting all day! And if a company doesn’t encourage or allow an opportunity for the people who actually execute the work on a daily basis to come up with new ideas, how does a company ever innovate?

The simple answer is that it doesn’t. Which is why this type of hierarchical structure has been dying a slow death.

And as the information revolution continues to breed more technology, start-ups and dynamics ways of working, this traditional way of working is becoming as obsolete as Nokia phones did after the release of the iPhone.

How To Adopt A “Flatter” Leadership Model

So, how do people become leaders when the corporate ladder has been replaced by a “flatter” corporate lattice?

This is a question the “Nokia” leaders of the world have been pondering, and to be fair, you can understand their confusion.

But if you strip back the essence of what makes an effective leader to the very core; it’s something that’s defined by a person’s qualities – not by their title.

So, how do you spot a potential leader in your organization?

Firstly, you need to play close attention to which team members in your organization people naturally flock to. They’re often the people who contribute a lot, continue to learn, and are always looking for ways to grow. They’re the ones others respectfully listen to during meetings. And the kind of people who naturally inspire others. These people are your leaders.

When put into this context, it makes complete sense. And also seems like complete madness to promote someone to a leadership role just because of tenure or because structurally, they should be next in line.

People will chose who they want to be lead by. This isn’t to say your company is a free-for-all and that you should rock up to work each day only then to decide who looks like the best leader (although, this would make an interesting experiment!).

It simply means to look out for people in your company who are respected and exhibit natural leadership qualities, and then give them greater responsibility and acknowledgement accordingly.

Take a project manager, for example. After continual success at orchestrating the implementation of high revenue projects – you promote them to head of business development.

All of a sudden they’ve gone from managing delegated projects, to being in charge of researching new projects, delegating and leading. If the person has a visionary streak in them, they’ll relish in the new role.

However, if they work better at following directions and set processes – rather than coming up with new ones and actually leading – you’ve not only lost a brilliant project manager, but now you’re stuck with an unsuitable leader.

In this example, it would have been more wise to reward the project manager by giving them a greater variety of projects, increased responsibility, respect and compensation – while doing the same role. This would have allowed them to still have influence and job satisfaction – but without needing to promote them to a leadership role. It would have been a win-win solution for both parties as a result of not following the traditional hierarchy mindset.

Of course in some instances, there will be good reasons to promote people. As a company grows and people with the right skills emerge to steer it in the right direction. But the thing to be mindful of is that being promoted to a leadership role isn’t a natural rite of passage for everyone.

So the challenge is for employees is to prove their worth and that they can get people to follow them.

Whereas for organizations, it’s to pay closer attention to the skills and worth of their staff, and then reward accordingly – while moving away from traditional hierarchical structures of leadership.

Tweet
Pin5
Share47
52 Shares
Discover The 4-STEP
LEADER'S “MINDSET MODEL”
CEOs, Celebrities & All-Star
Athletes Use To Stay
AT THE TOP OF THEIR GAME
GET INSTANT ACCESS 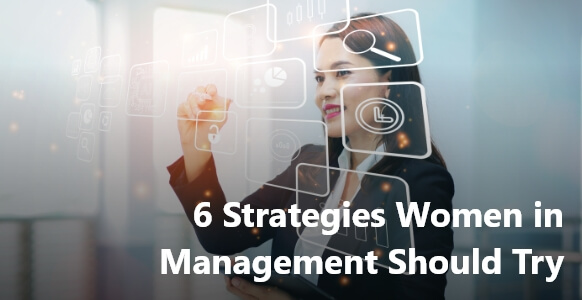 6 Strategies Women in Management Should Try