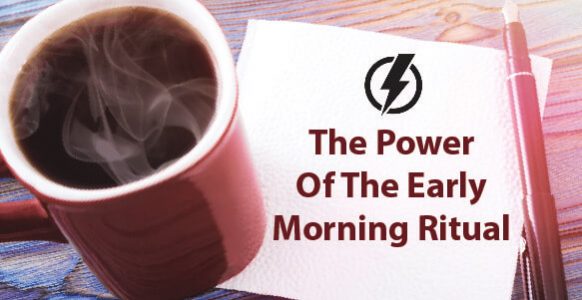 Everyone knows the famous saying from Benjamin Franklin:

“Early to bed and early to rise makes a man healthy, wealthy and wise.”

But is it true? Perhaps an even better question is this: Might it be true for you?

And that’s a question that only you can answer, which is why we’ll come back around to that important question later in this article.

In the meantime, it makes sense to take a look at two vital sources of information about morning rituals and routines: One is what scientific community has to say on the topic, and the other is the lived experience of successful leaders. After all, if you can mimic what has worked for those who are successful, it stands to reason that their success can become your success.

The general understanding from the scientific community is that being a night owl or an early riser has to do with your circadian rhythm, which is just a fancy way of saying your internal biological clock, and where you fall on the spectrum is referred to as your chronotype.

The human biological clock is a 24-hour cycle because of the 24-hour cycle of the Earth’s rotation with its day/night cycle. But the human clock does vary, such that those with a slightly longer circadian rhythm tend towards the night owl end of the spectrum, while those with a slightly shorter circadian rhythm tend towards the early riser end of the continuum. Then again, your internal clock can also be adjusted over time – the whole experience of jet lag shows that such adjustments can and do happen.

Meanwhile, early-bed/early-risers went to bed 70 to 90 minutes earlier, woke up 60 to 80 minutes earlier and accumulated 27 minutes more moderate to vigorous physical activity each day than late-risers.

What’s interesting here is that the early risers and the night owls were all getting the same overall amount of sleep. The difference was in when that sleep occurred. Of course, it’s important to understand that this study is showing what correlates to night owls and early risers, and correlation does not mean causation.

Digging a little deeper, the scientists found that nighttime is when more television programming and social networking opportunities are available in which teens are interested.

The biggest potential problem of being a natural night owl is when you don’t have the opportunity to get all the rest you need. After all, most work and school schedules necessitate early rising. But short-changing your chronotype has serious consequences.

A German study that performed brain-scans on night owls, early risers, and intermediates found that there were significant differences in brain structure. The night owls showed reduced integrity of the brain’s white matter that facilitates communication between brain cells, which is more likely to lead to depression and other cognitive impairments. Although more research is needed, the scientists speculate that the tendency of night owls to short-change their chronotype may be the cause.

Early-risers have been associated with success by a number of different studies. A Texas University study of self-proclaimed morning people among college students found they earned GPAs that were a full point higher than night owls. Harvard biologist Christoph Randler found that early risers were more likely to be proactive in setting long-range goals, anticipating and minimizing problems, and generally making things happen.

Again, it’s important to note that these are just correlations. The connection between early rising and success obviously depends to some extent on what you do with your time once you’re out of bed, which brings us to the second source of information about morning routines – what early-rising successful people actually do with their time.

Author Laura Vanderkam published a book in 2013 called “What the Most Successful People Do Before Breakfast.” Citing the real lives of successful CEOs, the following are 12 commonly occurring themes in their morning rituals:

It’s probably safe to say that not every successful CEO is doing all twelve items on the list every single morning before getting to work. In order to see what’s really happening, here are the real morning routines of two very successful people to see what works for them…

Peter’s a serial entrepreneur, author and public speaker with more than a dozen successful startups under his belt. Here’s how he describes his morning routine:

“I’m an early bird so I get up at 6am and the first thing I would do is have a pint of greens or some wheat-grass juice. I then set aside time to practice meditation and I’ll sit for 20/30mins to clear my mind and get centered. I will then read and it would usually be non-business related and be spiritual-based. After this I visualise and like to see myself in an actual experience, for example walking through the house or garden I may want and seeing it in the mind’s eye. Then the last part of my morning routine before I hit the gym is to journal”

Sage hits 5 items from the list (wakes up early, meditates, reads, writes, and exercises) and adds in two more, which are healthy eating and visualization (which many would consider another form of meditation). Curiously absent from his routine is anything that is actually business-related, which for him is intentional.

In his incredibly inspiring “London Real” interview, Sage notes that his girlfriend is not a morning person, and there are no children, so family time and spouse connection don’t need to be a part of his morning routine.

He also notes that a main focus of his meditation practice is to “connect with gratitude,” which corresponds to what many successful people tend to focus on in their morning writing. He notes that up through the journaling before going to the gym, he’s at about two hours, and if the gym adds another hour, then his morning routine is clocking in at about three hours total.

“5:44 my internal clock, without fail, always wakes me 60 seconds before iPhone alarm goes off; 6:00 Check emails and online news feeds for any breaking news/issues; 6:10 shower and dress; 6:20 drink a quick cup of coffee in my kitchen and spend a few minutes writing…a snippet of a dream, a bit of fiction or a journal entry; 6:45 peruse hard copy of newspapers (WSJ, NYT, FT, NY Post); 7:00 leave for office – brisk walk for exercise in good weather and take taxi in bad weather; 7:15 grab more coffee at the shop beside the office… oatmeal if I feel virtuous and egg burrito if feeling otherwise; 7:20  arrive at my desk…call head of media; 7:30 pull out a legal pad and create a list of the things I want to accomplish that day; 7:45 dig into the mountain of emails; 8:00 begin the day’s meetings with any number of external stakeholders, corporate affairs team members or Pfizer colleagues.”

Sussman hits 6 items on the list (wakes up early, writes, reads news, exercise, plan/strategize, reads email), and it’s interesting to see how much of her morning routine, unlike Sage, is driven by business-related activities. She has a family, but anything family-related is curiously absent from her morning routine.

It should come as no surprise that there is and will be a good deal of variation in the morning routines of successful leaders. And yet the two covered in detail here do dovetail pretty nicely with Vanderkam’s findings. Which brings us full circle back to the question posed at the beginning of this article – you’ve seen the scientific evidence, you’ve read about the actual morning routines of successful people and their common elements.

Do you think Ben Franklin’s advice can work for you? If you’re a natural early riser, then all you really have to do is decide on which elements of the morning routine you want to work in. The good news is that there are no hard-and-fast rules here, so it’s worth the effort to tinker with your routine and find out which mix of elements gets you the results you’re looking for.

If you’re a natural night owl, you have a little more work to do first in the form of gradually adjusting your internal clock to function on something nearer to an early-riser schedule, and then deciding what your morning routine will be. Either way, it’s clear that the morning ritual is an essential feature of successful leaders.

Do you have a morning ritual that helps get you into a productive mindset and flow? Share what you do from when you rise, to when you fire up the computer, in the comments section below.

Tweet
Pin4
Share542
546 Shares
Discover The 4-STEP
LEADER'S “MINDSET MODEL”
CEOs, Celebrities & All-Star
Athletes Use To Stay
AT THE TOP OF THEIR GAME
GET INSTANT ACCESS