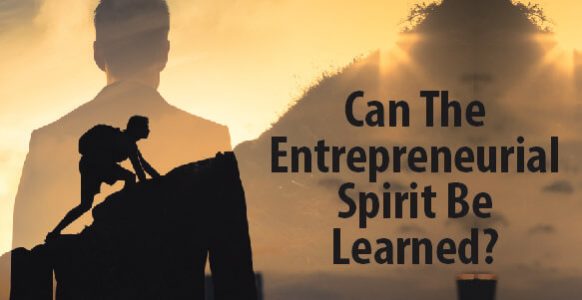 There’s a saying that the entrepreneurial spirit can’t be learned. That tomorrow’s entrepreneurs are born, not raised.

But when you think about it, this idea is completely flawed.

It’s like saying if your mother language is English, you would never be able to wrap your head (and tongue) around a difficult language such as Polish.

Or if you grew up eating fast food, playing video games and not exercising, then you could never become a disciplined martial artist or yogi at a later point in your life.

It’s the same in business.

Sure, some people might be born with a natural ability to throw caution to the wind and pursue their business dreams – despite the risks or challenges that lay before them.

However, that doesn’t mean that this type of “spirit” can’t be learned. It’s just like any skill or attitude that you want to adopt.

Some you’ll find you have a natural knack for. Whereas others you’ll completely and utterly suck at. Meaning that in order to attain a new skill or mindset, such a learning about online marketing or how to think strategically – boils down to sheer persistence.

And sometimes what fuels the desire for success (and your persistence as a result) only presents itself later in life.

For example, if you’ve lost your job and have a dwindling bank account. Or after years of working for someone else, you decide that this isn’t for you anymore. Determination for something more, something of your own, takes over.

Hollywood movie star, Will Smith, is famous for attributing his success not to the skills he was “born” with or who he knew, but to his unwavering persistence for success.

In the below inspiring video, he drills home the message that your skills – no matter how impressive they may be – will only take you so far in life. It’s your persistence (which you build throughout your career and life) that makes all the difference to your success.

Business magnate Richard Branson is also famous for shunning the belief that an “entrepreneurial spirit” can’t be learned.

When asked what he believes “makes” an entrepreneur, he attributes the following 3 requirements:

1. Have (or learn) a talent or skill (and be creative!)
2. Offer a service based on that talent or skill
3. Start a business from the service you offer

(You’ll notice that “being born” with a particular skill for business didn’t make the list).

Or take 32-year-old freelance sound mixer Graham Cochrane who now earns between $35,000 – $75,000 a month from a subscription video course he created.

However, he didn’t always have the “entrepreneurial gene.” In fact, he’ll be the first to admit that he was struggling with an opposing mindset:

“I have never been entrepreneurial. I was a scaredy cat. I wanted a stable job to pay my bills and not have debt.”

But what made him see the future of his career in a different light was when the start-up he worked for went under – and he had a newborn daughter and wife to support.

Graham had been making some extra money before losing his job through his passion project: freelance recording and sound mixing.

So he decided to throw caution to the wind and turn his attention to this skill, and create a lucrative income from it (despite only working 10 hours a week on it). Check out this article featured on the Business Insider to hear more about his inspiring story.

Therefore, if you’re also considering the entrepreneurial path, but don’t believe you’ve been born with the right “spirit” to do it on your own, turn your mindset around.

Focus your attention on your skill. Then, fine-tune it every moment you get.

Be consistent in your persistence and then build your vision, and business.

This is what the entrepreneurial spirit is about.

Maybe you’re born with it. Maybe you’re not. But if an entrepreneur is what you want to become, making it a reality rests on what you do today, tomorrow and every day that’s yet to come.

Tweet
Pin1
Share225
226 Shares
Discover The 4-STEP
LEADER'S “MINDSET MODEL”
CEOs, Celebrities & All-Star
Athletes Use To Stay
AT THE TOP OF THEIR GAME
GET INSTANT ACCESS